Genshin Impact: which Twin should you choose at the 'Select a Twin' screen?

Genshin Impact is a new, free-to-play action RPG title - and like many RPGs, it offers the player a lot of choices as you play, be that in character growth or other unique areas. You'll be given a choice right at the start, in fact: the game asks you to Select a Twin right off the back of the opening cutscene.

The cutscene will have already introduced you to the twins, but we know what'll happen with this choice: some of you out there will worry about what the choice between the twins means. Indeed, if you've landed on this page, you're proving that hypothesis! So, let us make it nice and clear... 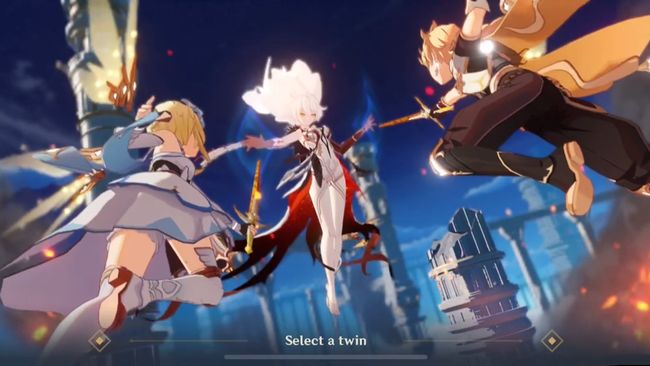 Select a Twin in Genshin Impact: what it effects

Do you want the short answer? Well, the short answer is... nothing! Which of the twins you select won't actually have much of an impact on the game. There'll be very minor differences, but nothing you need to worry about.

Due to their height difference, the male twin does runs a tad faster than the female twin but in exchange, the female twin hits a bit harder due to her slightly quicker attack speed.

Either way, you'll end up with a largely similar character: you'll end up with the same starting stats, similar growth, the same abilities - all that sort of stuff. In truth, this screen is actually probably tricking people into thinking there's more to this choice than there actually is: think of it as not choosing between twins, but rather choosing if you want to play as a male or female player character.

Your base stats will always be 912 HP, 41 Attack, 57 Defense and 100 Max Stamina. The pair even start with the same basic weapon. Once you've selected a twin, you can then of course you can go on to grow through playing the game, then diverging to make a character more unqiue to you.

You'll also have to name the twin you choose. You can call them anything you want, but there are some canon character name options if you prefer.

So either way, yes - pick based on which character you'd rather be playing as. It's not an important choice - and once you've made your choice between the twins, you can move on to the actual game proper, which contains much more exciting and important choices for you to consider... and mundane ones, like what order to find the Anemoculus collectibles in, which Ingredients to Process first... or slightly more interestingly, what recipes to cook in the first place. The biggest choice in a gacha game like this remains, of course, which banners to draw on in the wish system.

If you're just getting started and want to know a little more about plans for the future and the team behind it, we spoke to one of the Genshin Impact development team in an in-depth pre-launch interview - check it out.