Capcom's monster-collecting Monster Hunter spinoff manages to set itself apart from the crowd.

The 3DS game has been ported to smartphones along with a free demo.

This 3DS title comes to iOS and Android, but only for Japanese audiences.

Monster Hunter Stories - 'Day in the Life of a Rider' Trailer

An overview trailer detailing just about everything the game has to offer.

A free demo is also available on the Nintendo eShop

We won't have to wait long to try out this turn-based RPG spin-off.

Hatch and raise monsters state-side in 2017

Launching this year in Japan 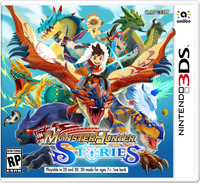