A small set of quests was added to Xenoblade Chronicles 2 last night for owners of the game's expansion pass. While most of these quests are not that remarkable, they give some little added tasks for players looking for a good excuse to revisit some of the older areas and test out your late-game party composition. Or maybe they're just there for completionists.  Some of the quests do give some neat little rewards like the ability to craft Premium Cylinders and access to highly rewarding Merc Missions, so these are definitely nice to have if working on late game tasks.

Actually finishing most of these quests is pretty straightforward -- go to the quest marker and do the obvious thing --  but one of them stood out as a bit of a frustrating exercise: Midnight Feasting. 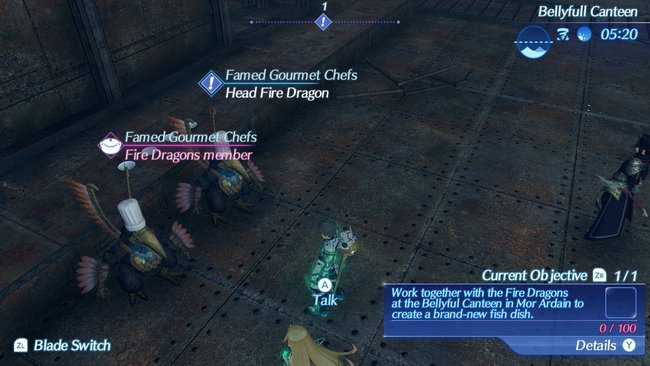 In Midnight Feasting, a Mor Ardain soldier will ask you to investigate the late-night happenings over at Old Industrial District. If you Skip Travel over to the Ruined Laborer's Bridge, you'll find your destination if you just travel a short ways south. Once there you'll find not some monster to defeat, but the Tirkin Fire Dragon chefs from the main story. They'll ask you to create a fancy new fish dish to please the head chef.

The main issue is that only one of the dishes will please him, and the game doesn't really give you any hints to which one it is. Luckily with the power of trial and error, we've narrowed it down to the Baked Redfish.

Xenoblade Chronicles 2 can get pretty complicated, but we've got guides to help out...

Xenoblade Chronicles 2: Where to find ingredients for the Baked Redfish

In order to make the Baked Redfish you'll need to create a Bizarre Soup and Trident Fish first, and then combine those with a few other ingredients to make the final dish. Here's where to find everything you'll need.

For the Bizarre Soup:

For each Trident Fish:

NOTE: You need two Trident Fish, so get 2x the ingredients listed here.

Lastly, combine these items with:

Once you finally have everything, turn them into the Head Chef and be glad you didn't have to try any of the other dishes. 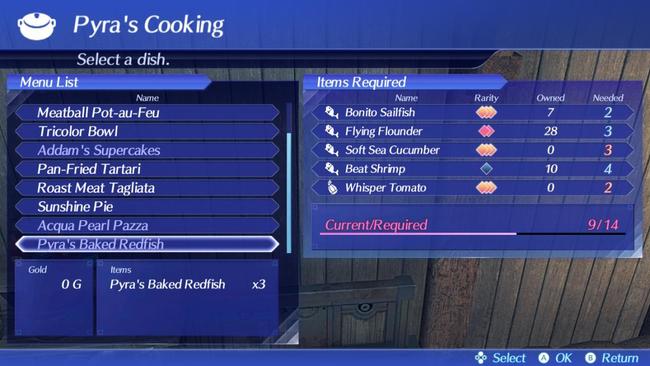 Upon completion of the quest, the friendly Tirkin will give you a recipe to use with Pyra's Cooking ability. Her version of the Redfish dish will take a lot of the same ingredients as before. This item seems especially well suited for tanking characters to carry in their pouch. Pyra's Baked Redfish provides  -9% ether dmg, -7% physical dmg, +20% max HP to their damage barrier.

You can find more Xenoblade Chronicles 2 guides and coverage over at the game's hub.